Not voting is neither stupid nor disrespectful – it’s a tactic 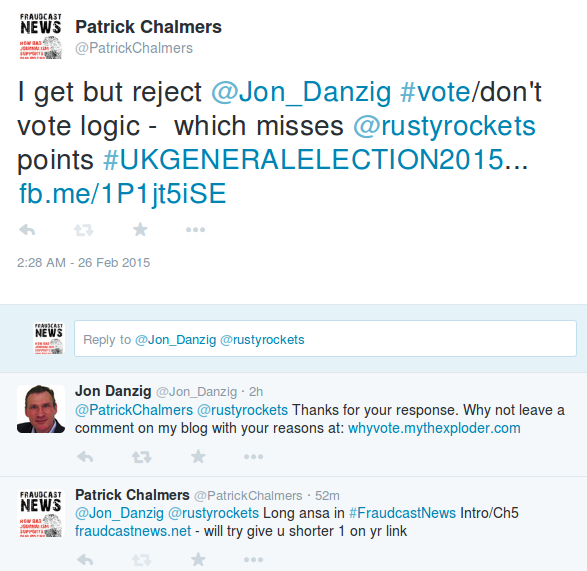 Below is my answer Jon Danzig’s challenge to respond to his post suggesting Russell Brand’s electoral advice to not bother voting was dumb and disrespectful to those who fought for our right to the ballot. I’d have posted it in the comments thread of his piece but got chucked off for reasons I couldn’t fathom.

Hi Joe – so here’s an answer that’s slightly longer than Twitter’s 140 characters. I said that I get but reject your logic about voting or abstaining, suggesting that you’d missed Russell Brand’s points in the Paxman interview.

How do I get your logic?

– People all over the world have fought over the centuries for universal suffrage – the right of almost all qualifying adults to choose their leaders from a restricted list of candidates in periodic elections.

– Because those people fought, some died, for our right to vote, a person’s decision to vote disrespects their memory and sacrifice.

I don’t in any way disrespect these people’s efforts – in fact, I both venerate them and am hugely grateful for what they did and some still do. I don’t think that’s an argument for me voting or not voting in UK elections.

So how is it that I reject your logic suggesting that I should exercise my right to vote?

For the record, I happen to be resident in France so am ineligible to vote in UK general elections. I do get to vote in communal, regional and EU elections here but not national ones. That’s not my point though.

If I were a British resident – as I have been in the past – I would almost certainly not exercise my right to vote in UK national elections. For the vast majority of UK constituencies where one of the main parties is the likely winner – Conservative, Labour, LibDem – I don’t think there’s any point in voting. There are marginal differences between the three but when it comes for example to economic policy – the bedrock of all policies – they are all variously but solidly pro-austerity. Throw in the UKIP EU dissidents and there’s still no change on that question. So for the vast majority of UK voters, what’s on offer involves choosing between parties who collectively subscribe to pro-austerity thinking – regardless of the fact that these policies aren’t working, that they heap the costs of the financial crisis on ordinary, poorer people when it was speculative capital and over-extended banks that got us into that crisis (NB we bailed out the banks – the real benefits scroungers/cheats in this debate) and because the reality is that “austerity” is in any case a cover for dismantling the public sphere and the welfare state in favour of private interests. That’s to say nothing of these parties’ failure to question the notion of economic growth as a sensible way to run the planet – it’s a recipe for ruining it more like.

I might be persuaded to vote in constituencies where there was a chance for an upset to pro-austerity thinking – perhaps where there were strong Green candidates and chances of their election or SNP candidates in Scotland (though for the latter, it is highly questionable whether the SNP would veer much from the pro-austerity model).

Choosing not to vote for any of these candidates is a political choice or tactic. It is not at all a suggestion that people disengage politically but rather that they ignore or minimise their engagement with the hulabaloo of elections and concentrate their energies elsewhere. Occasionally it might be tactically astute to vote – I wouldn’t hold my breath though.

We need radical political reform in the UK, at the EU level and globally. Nation-state representative democracy has had its time – a few decades of glory for citizens in Western countries in the aftermath of WW2, I’d suggest, but not any more. Real power has long left national parliaments – witness Syriza’s mauling by the German finance minister in the latest round of debt restructuring talks.

This interview with the Spain’s podemos leader Pablo Iglesias is highly instructive on what the future might possibly look like – though no one can say for sure.
For a UK perspective – the 2004 Power Inquiry was an intelligent stab at the question of why people didn’t vote. Though the inquiry failed to get much traction, it left us with a useful account of the then state of alternative democratic experiments around the world.
The work-in-progress bringing up to date of that report is here.
If you speak French – I interviewed a man called Charlie Bauer a few years back. He makes the case for radical democratic reform very powerfully, as you can see at the bottom of this post.
As a fellow journalist – a huge barrier to radical reform are the conventional expressions of our chosen profession. I tackle this in detail in Fraudcast News, which you more about here.