Some other democracies are possible 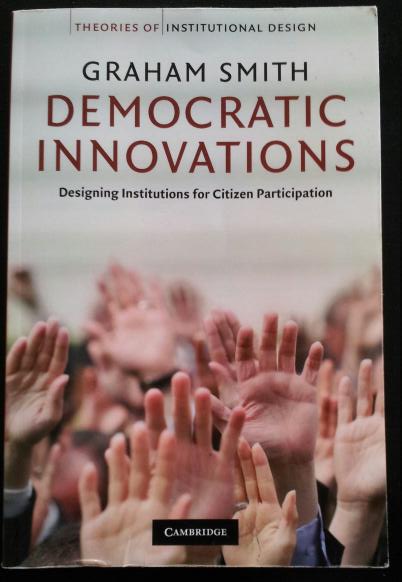 Next week – I am delighted to be going to Strasbourg, France for the 2016 World Forum for Democracy. It will be a rare opportunity to mingle with fellow democracy enthusiasts, though I use the word “democracy” with reservations given the casual looseness with which it is used and generally understood.

My main aim in going is to find partners with whom to collaborate on a project to promote Way Deeper Democracy. The core work of that will be to run, assess and proliferate democratic innovations so as to remedy the chronic failures of conventional representative democracies and their periodic elections. I will post more detail in the coming days – today’s focus is on the headline measures to determine whether a given political system is democratic or not.

In this, I am hugely grateful to Graham Smith, Professor at the UK’s University of Westminster, Centre for the Study of Democracy and a speaker at the Strasbourg event.

Smith’s book – Democratic Innovations – does an excellent job in helping move debate about the poor state of our representative democracies from the abstract to the practical and real.

His approach is to focus on which of a series of democratic innovations, present or recently past, could best take us towards more democratic modes of government. He takes a refreshingly pragmatic approach, pointing towards how democracy could occur with barely an elected politician in sight, if at all. His examples include the participatory budgets pioneered by the Brazilian city of Porto Alegre and the citizens’ jury British Columbia used to deliberate on provincial voting reforms.

Smith runs a cold-eyed rule over the main types of innovation, using measures of what he calls democratic public goods. This is where the book’s real value lies for the lay person – his measures are obvious, good-sense qualities that anyone aspiring to be a democrat would want to see in their favoured decision-making processes.

They are inclusiveness, the extent of popular control over any process, the deliberative nature of decisions taken and process transparency.

Inclusiveness is a critical one. Conventional elections – for various reasons – attract non-representative samples of their potential populations, which skews the nature of decisions taken. Absentees typically include societies’ poorer, more marginalised groups, a problem repeated in most referendums. Smith looks at the extent to which innovations tackle this problem, in terms of including the usually excluded and giving them real opportunities for influence.

The good of popular control relates to how much power citizens have over any given decision. That runs from problem definition, the analysis of options to tackle chosen problems, choosing a preferred option then implementing that choice. Such a start-to-finish analysis of political decision making lays bare how democratically threadbare are our conventional elections-driven systems. We vote for someone on a constrained list of more-or-less attractive candidates then the winners control decision-making throughout their time in office.

What Smith calls the deliberative quality of decision making examines how deeply a chosen approach allows people to get beyond the surface issues of a particular question. That includes whether the process involves people getting an idea of how other sectors of society think about a question and how they  might be affected by one choice over another.

Transparency is at once obvious while also being chronically absent from most representative democracies. In the context of the innovations Smith studies, it refers both to whether participants know the limits of their involvement and if the wider public knows what’s going on or can at least find out.

For the sake of his broader analysis, Smith also includes the additional measures of efficiency and transferability. These help determine if the innovations he studies might be feasible at scale and in different contexts.

For fans of sortition – the selection of citizen’s juries or mini-publics by lottery – there is certainly plenty to chew over in Smith’s book. His choice of public goods, and apparent non-attachment to one innovation over another, opens the door to possible holistic democratic solutions. These could include sortition for certain elements of the overall political process. The pragmatic combination of different innovations, coupled with safeguards to alleviate problems such as media failures to convey political diversity, offers plenty of hope for the potential of positive political changes.

This is a valuable contribution to what is a vital debate for our societies’ futures.